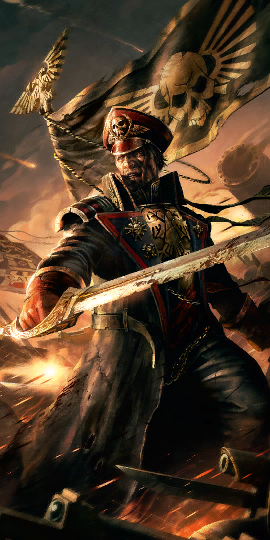 Made up of innumerable billions of soldiers from a million different worlds, the Astra Militarum is, by sheer weight of numbers, the greatest army the galaxy has ever known. They hold nothing less than the survival of humanity in their hands.

The Astra Militarum, commonly known as the Imperial Guard, is the primary fighting force of the Imperium of Man. Across a galaxy of a hundred billion stars, there must be billions of Guardsmen at least—yet even the Departmento Munitorum on Terra, which oversees this immense force, has no real idea of how many troops there are at any one time. A safe estimate is to say that there are millions of regiments.

What the Imperial Guard lack in strength, courage and resilience, they make up in numbers, organisation and fighting vehicles—the Guard's wide range of tanks is rightly feared. The manpower of the Astra Militarum is predominantly human, though they do employ stable mutant strains, such as the giant Bullgryns. All these troops are equipped with the best mass-produced weaponry that the Techpriest war manufactories can provide, though it is often backward compared to that wielded by their enemies.

Across the vastness of galactic space, the vast majority of the Imperium's battles involve the Astra Militarum. It is by their actions and endless sacrifice that mankind has claimed and held its place in the universe.

Community content is available under CC BY-NC-SA 3.0 unless otherwise noted.