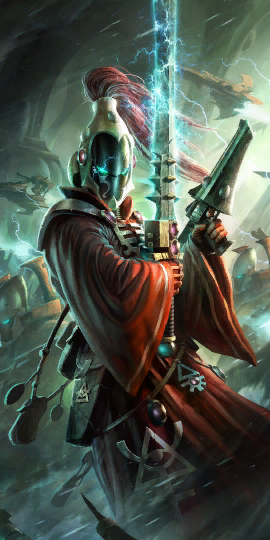 The Craftworld Aeldari are a refined, capable race that experiences everything intensely and artistically. Yet when roused to war, every last one of them can be a fearsome foe, having trained several human lifetimes in the arts of war. Though fragile, they strike quickly and disappear before an enemy can fire back.

Sixty million years ago, the Old Ones and the Necrons fought The War in Heaven. The Old Ones lost, but their mantle was inherited by one of their creations—the Aeldari, a psychically-powerful race of immense sensitivity. Over the subsequent millenia, they ruled the galaxy, slipping over time deeper and deeper into depravity and arrogance.

Their golden age ended with the birth of Slaanesh, the Chaos God of pleasure. At the moment of her birth, the core of the Aeldari civilization was utterly destroyed, its citizens’ souls and even its gods consumed by the nascent god. Where the Aeldari homeworlds once were, now there is only the Eye of Terror, a massive rift into the Warp. Only a few Aeldari survived: the hardy Exodites, on distant agrarian planets; the degenerate Drukhari and mysterious Harlequins, hiding in the Webway; and the restrained Aeldari, on enormous trading ships known as Craftworlds.

Doomed and declining, the Aeldari seek to avoid their own consumption by Slaanesh at all costs. They find themselves on Gladius Prime, chasing a Farseer’s prediction that this planet is key to the survival of all Aeldari...