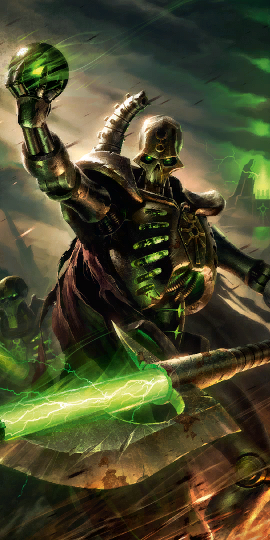 An eternity ago, the Necrons ruled the stars as cruel, deathless metal masters. Now they are awakening. Legions of sinister, advanced war machines are pouring from the Tomb Worlds to conquer and enslave—nothing mortal is safe.

An eternity ago, the Necrons forsook the frailties of flesh for deathless bodies wrought from cold metal, in their subjugation to the star-gods known as the C'tan. In their new immortal form, they took on the then-masters of the galaxy -- the Old Ones -- and in aeons-long battle they defeated them. In their desperation, the Old Ones seeded the galaxy with psychic races, thus awakening the horrors of the warp, and the Necrons -- weakened by a simultaneous battle of liberation from the C'tan -- retreated to their homeworlds.

There, falling into hibernation, they slumbered for untold time. As other races were born and drove themselves to extinction, they lay deep and undisturbed in multitudinous worlds, tended and defended in their not-sleep by their monstrous Canoptek automata.

Now, across the galaxy, they are awakening. Even here, this Crownworld's master circuits are stirring. The Necrons -- now unthinking machines, save for their few Lords and Triarchs -- are arming themselves for war again. Their technology is millennia ahead of that of the galaxy's younger races. Soon, legions of sinister, advanced war machines will pour from the tombs buried beneath the planet to conquer and enslave -- nothing mortal is safe.