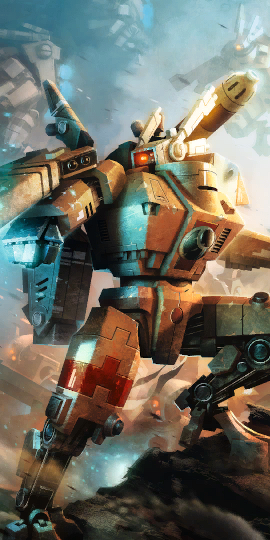 The T’au are a young race, newly arrived on the galactic stage, with but a handful of worlds to their name and peaceful intentions—they merely wish to work for the Greater Good of all intelligent species. But not all races will listen to their words of peace, so the T’au and their allies will use their advanced military technology to make them listen—or sear the flesh from their bones if they stand in the way of progress.

The T'au Empire had never faced such an existential threat. On one side lay the relentless hunger of the Tyranids; on others, the Imperium's impassable flame-wall, the Sautekh Dynasty of Necrons, and the growing Great Rift, Mont'yhe'va, Devourer of Hope. How could they survive?

The solution was the Fourth Expansion, led by the great Commander Surestrike. He would lead his Fire Warriors to claim new worlds far from T'au. They might be a young empire, a small people—but they fight for the greater good of all species and they could not fail.

Yet, disaster struck with the T'au's new warp drives. Space twisted, tore, opened, span insanity and monstrosity into reality, swallowing the fleet. One ship was taken, moved by many hands, spat out alone. Above a mined Imperial hive world, far too far from T'au. Gladius Prime. Now these T'au must fight just to survive.