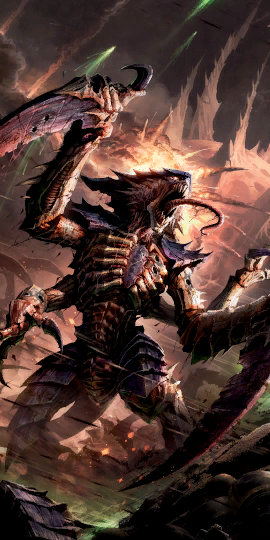 Of all the races in the 41st Millennium, the Tyranids are the most alien. Each Tyranid is a living weapon, a creature perfectly designed to fulfil its role. Driven by the gestalt consciousness of the Hive Mind, the Tyranids overwhelm their prey with weight of numbers. Those that are not swept aside under a tide of razor-sharp claws and lethal bio-weaponry fire are smashed asunder by gigantic alien monsters the size of battle tanks.

The Tyranids are the most alien of the races to infest Imperial space, for they come from beyond. Their hive fleets stretch out like tendrils, great chitinous bio-ships drifting in brooding silence. Once the remorseless shoals of the bioships detect the presence of a prey world, they close upon their target, grasping it like some many-tentacled beast seizing its food. In the ensuing invasion, the world will be consumed, for the Tyranids hunger for all living matter. There is no escape from this final embrace and when the Tyranids finally depart, they leave behind a barren world, a scoured ball of rock now devoid of anything that lives.

A Tyranid hive fleet consists of millions of living starcraft, each home to untold numbers of monstrosities evolved from the geno-organs of the ship's reproductive chambers. All the creatures serve the entity that is the ship, and the ship exists only as part of the horrific super-organism that is the fleet. Even when dead, organic matter is reconstituted back into the ship, along with captured biomass from the invaded planet. It is then all dissolved into a rich biological gruel used to make new Tyranid creatures, each ready to serve the Hive Mind and begin the feeding process anew.

But on Gladius, the Tyranids are few and scattered, brought here by meddling men. The warp storms keep them distant from the will of the Hive Mind and the Imperial citizens think of them merely as pests. They should worry more...